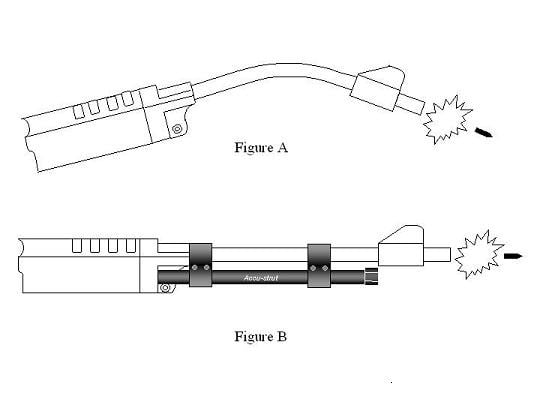 Stabilizing geometry The early Ruger Mini-14 was produced with a relatively thin barrel. While this provides for one of the Mini's most attractive features- lightness- it  becomes problematical with respect to the gun's overall accuracy. The thin, whippy barrel, combined with the rifle's highly dependable but aggressive cycling mechanism, subjects the bullet to complex and unpredictable vibrational patterns as it leaves the muzzle. All this translates to imprecise bullet placement downrange.

Figure A depicts this in exaggerated form.

Figure B shows how the addition of a simple engineering component- a "rigidity strut"- can address and largely eliminate this problem:

Firstly, a second rigid strut member more-or-less doubles the rigidity of the overall system. To put it simply, two barrels must by definition be stiffer than one.

Secondly, the added strut is displaced from the primary barrel by secure mounting clamps, adding the advantage of basic geometry to the overall equation. This configuration adds further stiffness in the most critical direction, i.e. the vertical plane where most of the recoil takes place. 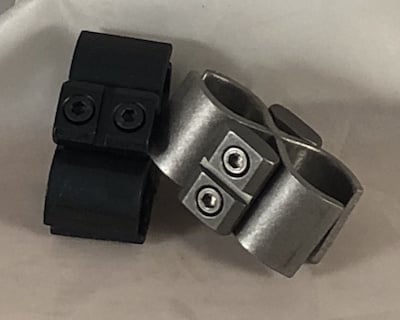 The Flex-clamp system: a superior design

Can you have too much rigidity? In a word, yes. You may have noticed other barrel stabilizers use a heavy, machined-billet clamp, and more secure attachment to the gasblock as well. We think this is a mistake.

In keeping with the principles of "free-floating", optimal barrel stability is attained when the barrel is made as rigid as possible while touching as little as possible that isn't barrel. Heavy attachments like billet clamps and overly solid attachment to the gasblock can introduce preload stresses that can actually make the rifle shoot more poorly as it heats up.

Accu-strut uses a proprietary "Flex-clamp" that confers high rigidity without coupling the barrel to phantom stresses. Additionally, the rear set-screws are a minimalist design that allows some rotation yet still keeps the strut from slippage.

THE ONLY FREE-FLOATING STRUT ON THE MARKET!